A popular “Blawg” with roots to the NBHCP 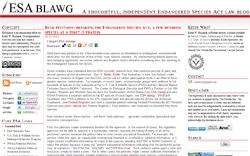 The lead attorney for the federal government in the NWF v. Babbitt case was a disciplined young man with an amazing intellect by the name of Keith Rizzardi. (Some may remember that the NWF v. Babbitt case resulted in the 1997 NBHCP becoming the 2003 NBHCP, which the Conservancy operates to this day.) Keith has been out on the Conservancy’s preserves, knows the 2003 NBHCP very well, and really was the impetus behind the Conservancy’s efforts to reduce preserve fragmentation, which has since been accomplished and which serves the NBHCP’s “Covered Species” well. Keith has since moved on from the Justice Department, and now lives in South Florida. I raise all this because I recently found out that Keith is the author and editor of the “ESA Blawg: A Thoughtful, Independent Endangered Species Act Law Blog.” You can find it at: http://www.esablawg.com/. His “ESA Blawg” has turned into a pretty big deal, and is extraordinarily well done. If you are interested in endangered species act issues, you might enjoy taking a look at Keith’s blog. It is great to know that an “NBHCP alum” has made it big!