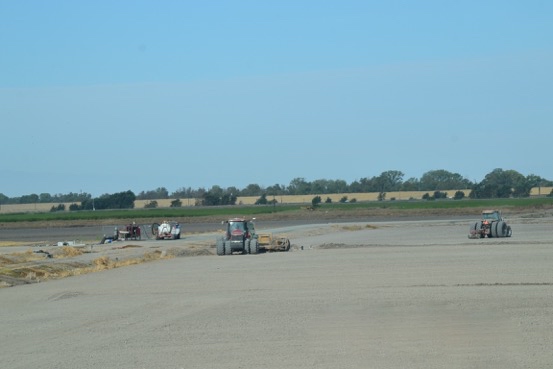 In far northern portions of the Natomas Basin, the Conservancy is producing food for humans and at the same time is providing habitat resources for the Giant garter snake. The property shown in the adjacent photo was soil mined for the recent Natomas Levee Improvement Project, a massive flood protection effort conducted by the Sacramento Area Flood Control Agency (SAFCA).

SAFCA officials engaged the Conservancy on the property, and Conservancy teams began the process of reconditioning the soil, improving drainage and adding soil nutrients into the fields. Already, rice has been produced on the property, but efforts continue to improve the land and put it into increasingly productive use.

The Conservancy has learned that wherever rice production has ended, Giant garter snake populations have been decimated. The effort on the field shown here is to place rice agriculture back into active production. Doing this work on soils that have been mined as deep as 10 feet below grade has required a team of experts, including top-rate rice farmers. The successes on these fields accrue to the benefit of the Giant garter snake, rice consumers and the local economy