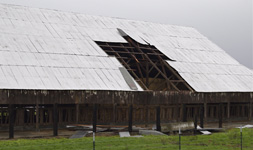 The January and February wind and rain storms have been a real challenge. As the attached photos show, two of the Conservancy’s barns took some very serious roof damage. Water leaked through the big barn on the Silva tract, and fell on to a nice stack of native grass hay. At least the outer portions of the hay stack are likely damaged. Duke, one of the guard dogs on site, also ran away, and I believe it was the lightning during the January storm that sent him running. Thankfully some brave animal rescue folks found him and he was safely repatriated to his post. The storm also caused a short on the electric fence that surrounds the Betts, Kismat and Silva tracts. This fence is used to keep livestock contained. Two trees and several tree limbs fell on fence lines as well, and these needed a quick clean-up response. Luckily, the Conservancy’s livestock count was pretty low at the time, and we didn’t have too much trouble keeping all the four-legged lawnmowers (goats, that is) on the preserve. 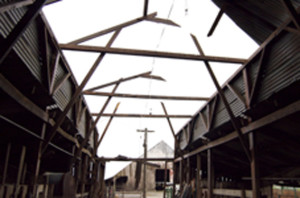