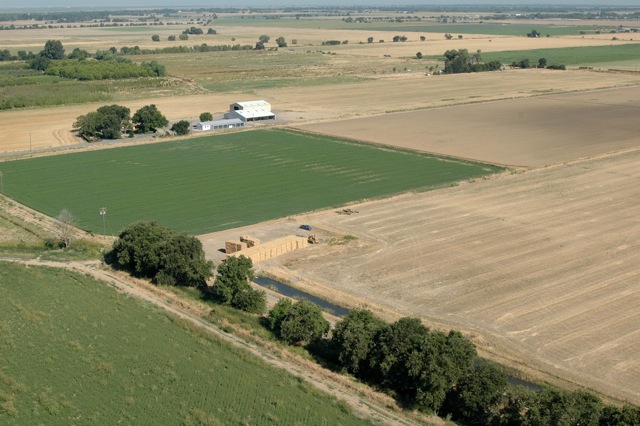 The Conservancy initiated a managed marsh project on the site several years ago. With earth-moving equipment adjacent, we “borrowed” soil from peaks and hauled that soil to an area well-suited to alfalfa growing (well served with irrigation water, easily drained, a “landing” pad nearby for the harvesting vehicles to use and store alfalfa hay bales, etc.). It is also near Swainson’s hawk nesting trees along the Sacramento River. The soil was then mounded up so that alfalfa would not experience the destructive “wet feet” scenario where shallow water tables drown the plant’s roots. The raised bed was then leveled for ideal irrigation and drainage. Now, we can say that the field has nearly completed an entire life cycle of alfalfa (in this case, getting five years out of a crop is about standard). The aerial photo adjacent shows a green, roughly rectangle tract that is this alfalfa patch. We are very pleased this has worked out. Other experiments have not. We’ve learned from this, and will use it elsewhere as opportunities arise.