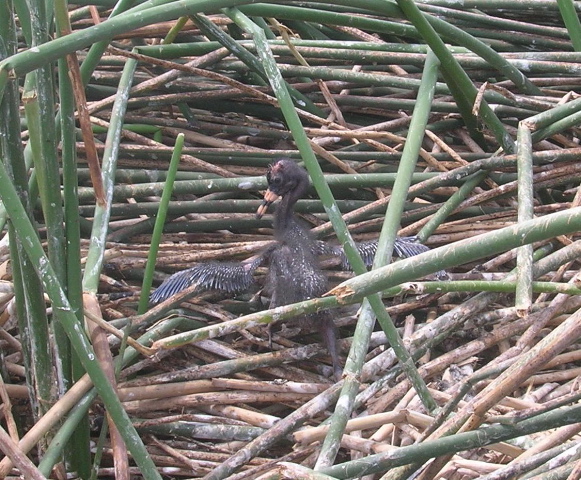 It is impossible not to be amazed when one sees such things. But recently, I was on a required preserve inspection, this time by water (paddling in my kayak). Visibility was limited because tule rose from the marsh complex 10-feet high above water line, and the channel I was paddling in had a lot of sharp turns and bends. In the thick of things, I see a cluster of white-faced ibis nests. (The white-faced ibis is one of the 22 “Covered Species” covered in the Natomas Basin Habitat Conservation Plan.) Some nests were home to chicks already out of their shells and spreading their wings. This little guy (see photo) was a bit out of the nest, but was watched closely by its mother.

This successful nesting activity is on a preserve which critics told public bodies some years ago that we would never be successful getting white-faced ibis to nest. But there are at least 2,500 nesting pairs on this preserve today, the second year in a row of successful nesting.

Lesson learned from this inspection: we need to be very careful about water level management on this preserve. Many nests were just a few inches above the water line. If we’d let the water level rise, it would flood many nests. So, as water elevation changes need to be made, we need to make sure that such changes are made after fledging.