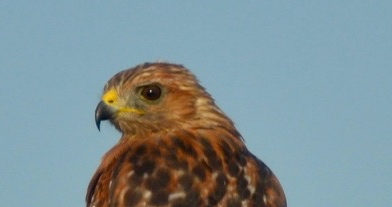 I post this one not just to show the beauty of this creature, but rather, to simply say that this year more than ever, we are seeing a very diverse mixture of raptors on Conservancy property. Yes, way beyond the NBHCP’s “Covered Species.” It’s a broad check list. The featured raptor here is just one of many. We can surmise that if there are a lot of raptors on the preserves, there must be a lot of prey. Mostly meadow mice. 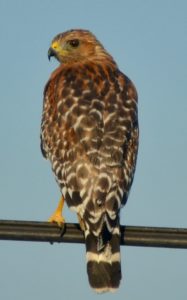 Here is one theory: there are two factors at play. One is that with the maturity of the marsh complexes, along with the associated uplands, they are simply becoming more established habitat for a diverse population of wildlife.

The second is that we had some pretty good rainfall this past winter after several years of extremely low precipitation. Perhaps this more normalized winter rain moistened up the soil to the extent where prey begets prey. By that, I mean that the mice eat the grains from the grasses that grew more richly and abundantly (largely because of more moisture) and as the mice fattened up, they had more productive litters. And thus more prey for the raptors. This is all theory. Whatever the cause, we are liking the results!