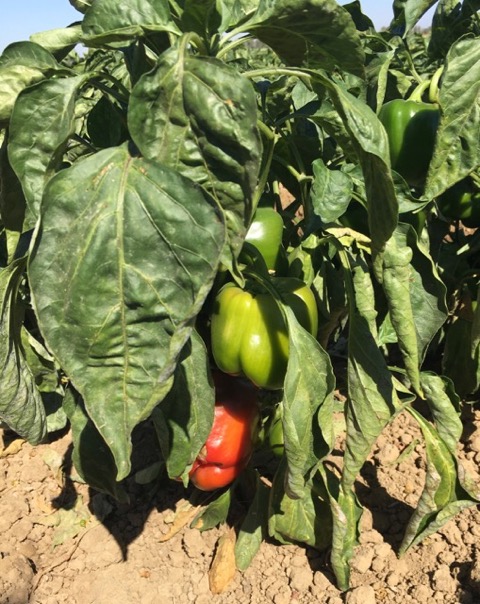 (October 5, 2016) It may seem strange that peppers are grown on some of the Conservancy’s mitigation ground (see photo). But there is a reason. First is that the ground these papers were planted on normally supports alfalfa. And alfalfa is the preferred crop for foraging Swanson’s hawks.

We’ve had some successful alfalfa crops on this particular field (where the photo was taken), even though the soil types wouldn’t support alfalfa before the Conservancy acquired it. But as a part of a marsh restoration project, top soil was removed from an adjacent parcel and mounded up on this one. We’ve had eight years of alfalfa since then, so we’re declaring success.

But soils need a break sometimes. And after four- or five-years of existence, alfalfa needs a break for certain agronomic reasons. So, four or five years in alfalfa and one year out. We use that year, in this case, to grow peppers.

Moreover, there will be leftover peppers in the field after these peppers are harvested. These are peppers that are damaged or imperfect and can’t win consumer acceptance. Left in the field post-harvest, they afford a free meal for meadow mice, which are the Swanson’s hawk’s favored prey.

So peppers fit the bill, do double duty, and besides, bring some color to the Conservancy’s fields!