Seedlings and saplings and beavers 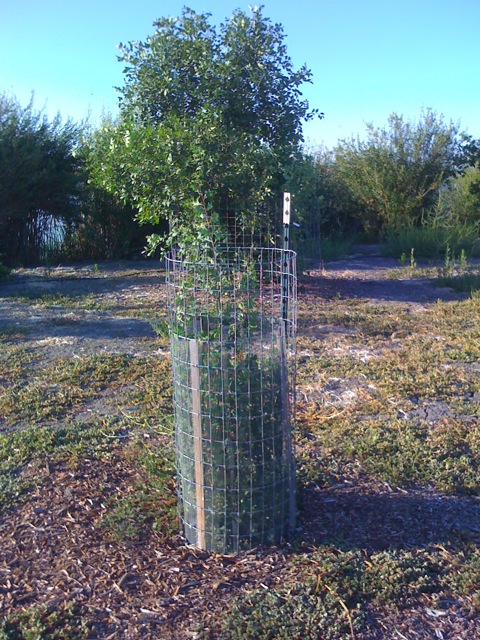 The first warning came from one of the best wildlife biologists I have ever met, Kelly Hornaday. About 11 years ago. She was then with the U.S. Fish and Wildlife Service office in Sacramento, but is now on the East Coast. I had made a (I thought) funny comment about beavers and the need to keep a close watch on them; I just didn’t think at the time that they could be as destructive as the NBHCP suggested. Kelly spun around and admonished me to not take this lightly. That beavers can do enormous damage to a managed marsh complex. I later learned she was more right than I could ever know. The Conservancy has spent thousands of dollars replacing native trees that have been planted over the past decade. These are planted to serve as future nesting trees for Swainson’s hawk, and we are directed to plant them in the NBHCP. But the rate at which they have been felled by beavers is awe inspiring. So we replant. Note in the accompanying photo the security with which we have planted this replacement seedling. DOUBLE fencing, double staking. The stakes are necessary so the beavers don’t tear up the fencing or push it over. The Conservancy hired Sopwith Farms to do this replanting, and its crews have done an excellent job. Let’s see if we can be as persistent in preserving the trees for later Swainson’s hawk nesting as the beavers have been for cutting (gnawing?) them down for purposes of congesting the flow of water in the marsh complexes.
Those pesky beavers. I was warned by USFWS.