(March 8, 2017) Those cute little Burrowing owls. Over the years, I’ve posted on this blog on a couple of occasions that I am often asked which is my favorite of all the NBHCP’s Covered Species. My first thought when responding to this question is the Burrowing owl. They’ve been with the Conservancy from the beginning, with only periodic absences. And they are, by my estimation, the most gregarious and outgoing of them all. Some might say simply, “cute.” 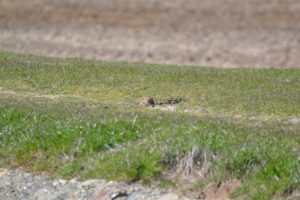 The Conservancy has invested in Burrowing owl enhancements, and the photos here show one of the areas where we’ve invested. In cooperation with the Natomas Central Mutual Water Company, we added approximately 4,100 cubic yards of soil on to a Water Company highline irrigation structure in the Conservancy’s Central Basin Reserve Area. This bulked it up, and then by adding holes into the embankment, we hoped to give the owls an idea: hey, this might be a good place to nest! They loved it and have become regulars on this particular facility.

In another experiment, we followed the guidelines then in circulation for installing Burrowing owl nesting areas boxes. Lots of underground pipe, risers, boxes, and built-up area. It’s been years and unhappily, no Burrowing owl activity.

In yet another experiment, we used a mound area where we’d seen Burrowing owl activity and then with grazing animals, mowers and choppers, we kept the vegetation height down in the vicinity of the Burrowing owl nests. This, we believed, helped them keep an eye out for predators, and worked as well. But ultimately, coyotes discovered this area, and in a battle between a Burrowing owl and a coyote, the Burrowing owl is almost always the loser.

What we’ve learned from this is that among other things, sometimes simpler is often better. We first got this notion from local avian biologist Jim Estep. (Jim is also on the Conservancy’s biological effectiveness monitoring team.) We’ve adapted that slightly to state that simpler is often better, but that the best solution is to keep trying solutions. Experimentation is key. So, we’ll keep doing just that, and hope we continue to find more successes like this year’s re-occupation of a portion of the Conservancy’s Central Basin Reserve Area, where these photos of one of our favorite NBHCP Covered Species were recently taken.