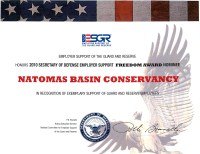 Conservancy Board member Tom Urquhart recently returned from military duty in the Mideast. For the six months he was away, the Conservancy’s Board of Directors agreed it was appropriate to hold Tom’s seat open for him. Small organizations like the Conservancy have greater difficulty holding vacant positions open, even though this was for a Board seat and not a staff position. For this, the Conservancy was nominated for the 2010 Secretary of Defense Employer Support Freedom Award (see image adjacent). The award acknowledges employers for the considerations they make for National Guard and Army Reserve personnel when they are called to active duty. From the Conservancy’s standpoint, it was good to support this cause. But it is also good to support Tom’s work in this regard, as he has generously given of his time and effort to support the Conservancy’s efforts to implement the NBHCP. It’s been a great partnership.