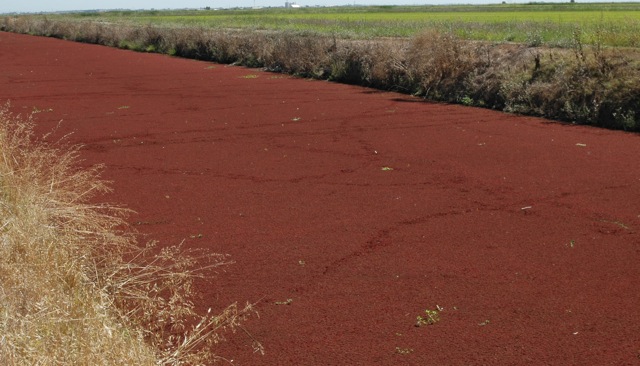 The aquatic plant on the surface of the North Drainage Canal, pictured here, is azolla (some call it mosquito fern). It is described in Wikipedia as follows: “Azolla floats on the surface of water by means of numerous, small, closely-overlapping scale-like leaves, with their roots hanging in the water. They form a symbiotic relationship with the cyanobacterium Anabaena azollae, which fixes atmospheric nitrogen, giving the plant access to the essential nutrient. This has led to the plant being dubbed a “super-plant”, as it can readily colonise areas of freshwater, and grow at great speed – doubling its biomass every two to three days.” Needless to say, it can completely take over the Conservancy’s managed marsh complexes, leaving them virtually useless as habitat for the one of the NBHCP’s two primary species, the giant garter snake. As an aquatic animal, the snake relies on smaller aquatic prey. But when there is a three-inch mat of azolla on a water channel, for example, the water chemistry changes so that there is no prey. I’ve even wondered if the snake can break through the cover of azolla, just to get air. Luckily, the photo here isn’t of the Conservancy’s preserves, but of the adjacent North Drainage Canal. The main reason I wanted to share it? Can you see the the footprints! For a mile up and down the North Drainage Canal, there are footprints easily seen on the surface of this water. On the “azolla” cap. Amazing. The Conservancy spends a lot of money trying to control azolla to keep the preserves fully functional for use by giant garter snakes. Wishes one of our covered species would eat it!