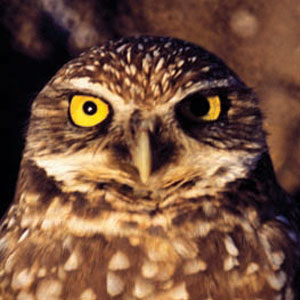 About the Burrowing owl

The Burrowing owl is found in suitable open habitat throughout western North America from southern Canada to northern Mexico, as well as in Florida, the Caribbean, and Central and South Americas. They are not found in high mountain areas or dense forests, but they have been observed at elevations up to 5,250 feet (1,600 meters). Burrowing owls are found in several locations in the Natomas Basin, including the higher terrace along the basin’s eastern border, in the tree planter boxes in the Power Balance Pavilion (formerly known as Arco Arena) parking lot, and along the higher berms of the larger irrigation and drainage canals in the central basin.

Burrowing owls typically inhabit dry grasslands, deserts, and open shrublands containing burrows in which to nest and roost. Their preferred habitat is characterized by sparse, low vegetation and relatively flat topography, with elevated perches to provide unobstructed views. Burrowing owls have been found in pastureland, along road cuts, and in the margins of croplands, airports, and golf courses.

Burrowing owls nest from March to August in old rodent burrows, with peak nesting occurring in April and May. Where there is a shortage of natural burrows, Burrowing owls may use culverts, pipes, or other artificial burrows, and if the ground is soft enough they sometimes dig their own burrows. The nest chamber is usually lined with a variety of materials including feathers, dried cow dung, grass, and debris. On average, the female lays five or six eggs, although this number can vary widely. Unlike other owls, Burrowing owls nest in loose colonies and are relatively social. Young are helpless at hatching and can be seen outside the nest at about two weeks of age, with their first flight occurring at about four to five weeks.

Little is known about the Burrowing owls migration patterns. In California, most owls are resident, although some owls from northern breeding populations may migrate to Central America for the winter. In resident birds, winter may prompt them to move to lower elevations, with most owls returning to the same nest sites year after year.

Burrowing owls are found in close association with burrowing rodents such as California ground squirrels as well as the reptile and amphibian species that also use these burrows. Burrowing owls are active both night and day and are preyed upon by a variety of mammalian and avian predators including foxes, coyotes, domestic dogs and cats, and larger raptors. The diet of burrowing owls consists mainly of insects, and it has been reported that they decorate their burrows with cow manure and other mammal scat to attract their insect prey. Burrowing owls also consume small mammals, reptiles, birds, and carrion.

Images of the Burrowing owl 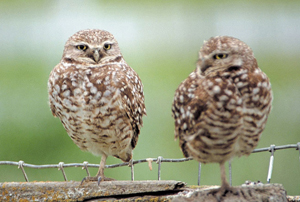 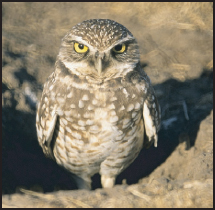