State- and federally listed as threatened

About the Giant garter snake

The Giant garter snake inhabits low elevation wetlands in the Sacramento and San Joaquin Valleys, from Chico south to the Mendota Wildlife Area in Fresno County. There are 13 recognized subpopulations of giant garter snake, one of which is the Natomas Basin population.

Giant garter snakes are found in marshes, wetlands, low gradient streams, sloughs, rice fields, and the irrigation and drainage canals that supply them. They are active from spring to mid-fall, requiring herbaceous emergent vegetation such as bulrush (Scirpus spp.) and cattail (Typha spp.) for foraging habitat and escape cover and vegetated banks and open areas containing small mammal burrows, cracks, and crevices for basking and short-term refuge habitat. In winter, they require upland areas above the normal high water line during their inactive period.

Giant garter snakes breed from March to April when they emerge from winter refuges, and live young are born in late July to early September. Females give birth to an average of 23 young. The maximum recorded brood size is 46. Upon birth, the young disperse into surrounding cover and can begin hunting on their own. Young do not reach sexual maturity until three to five years of age.

Giant garter snakes are active in aquatic habitats from March to mid-fall. They move to upland burrows in the fall where they remain dormant until early spring. Upland wintering sites are generally not more than 820 feet (250 meters) from aquatic habitat.

Images of the Giant garter snake 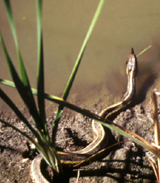 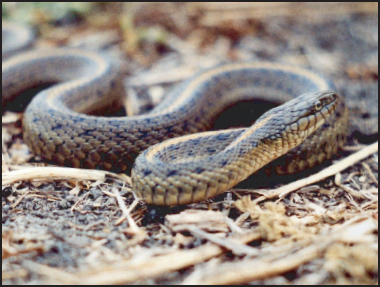 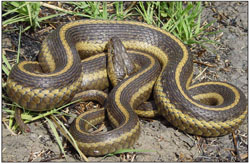