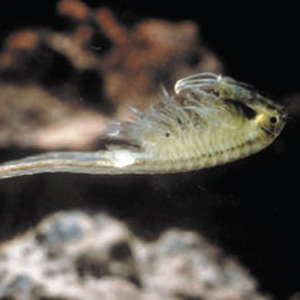 About the Vernal pool fairy shrimp

Vernal pool fairy shrimp are found in grassland vernal pools or similar seasonal wetlands. They require cool water with low alkalinity and low total dissolved solids and tend to be found in smaller pools about six inches (fifteen centimeters) deep that stay flooded for relatively short amounts of time. In the southern extent of their range, Vernal pool fairy shrimp are found in larger, deeper pools, probably because of the cooler water temperature of these larger pools.

The vernal pool fairy shrimp reproduces in ephemeral pools flooded by winter and spring rains. Adults cannot survive the drying of these pools in the summer. However, the eggs laid by the female are surrounded by a shell that protects the embryo from the arid environment; these cysts allow the embryo to remain in a dormant phase (also called diapause) for years if necessary. The vernal pool fairy shrimp will not hatch unless water temperatures are below 50 degrees Fahrenheit, which can occur with cold winter rainstorms. With the onset of suitable temperatures and flooding, some eggs in the vernal pool soils will hatch. Once hatched, the young shrimp go through three stages before reaching adulthood. The rate at which they mature depends on water temperature and can vary from 18 days to more than 120.

Vernal pool fairy shrimp can colonize new pools when relocated by flood waters or when cysts become attached to the feet of birds or other animals. Cysts can also pass unharmed through the digestive tracts of other animals, providing another potential mechanism for dispersal between pools.