Appreciation for an extraordinary job 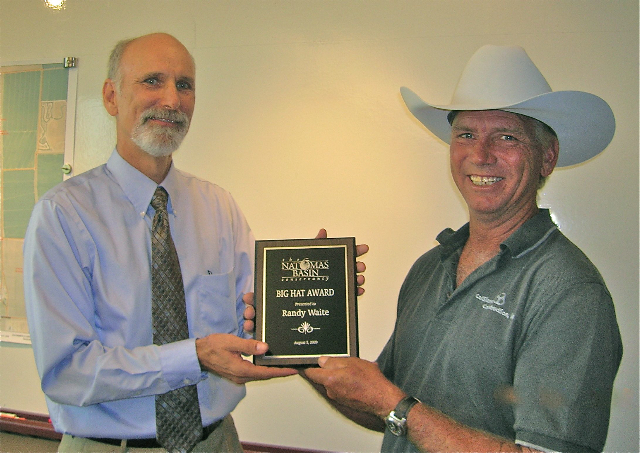 During the presentation of the award, Board President David Christophel (see presentation photo) gave Waite the Conservancy’s “big white hat” and a commemorative plaque, noting that “Randy worked on the Conservancy’s BKS South Course marsh channel maintenance project this summer, and was on-site each and every day. However, he did more than just do his job and do it well. Randy did a phenomenal job on this project, and helped bring it in at budget and well under the established deadline, thus allowing the marsh to return to a fully functioning capacity much earlier than expected.”

Keeping the managed marsh’s channels fully functional so that they perform their required mitigation function is required in the Natomas Basin Habitat Conservation Plan (NBHCP).

During the BKS tract channel maintenance and channel clearing project this summer, Waite came out on most weekends on his own time, just to make sure things were going well on the project, and was always on the lookout for the HCP’s Covered Species. He found several, reporting them to the Conservancy and its biologists, pulling all equipment back to avoid injury to the species, and giving them an opportunity to seek safety. Also, before allowing maintenance equipment to move forward along a channel to perform the specified maintenance work, Waite went so far as to hand dig hard, clay soils to trace suspected giant garter snake (GGS) burrows in order to be certain his crews were not going to work a channel or bank at the expense of a GGS. Finally, he made numerous recommendations to the Conservancy, nearly all of them implemented, that reduced costs and improved the biological functioning of the finished project.

So, to Randy Waite, the Conservancy has bestowed its Big Hat Award, in recognition for an extraordinary job done in helping make this year’s channel clearing and maintenance project a safe, huge success.