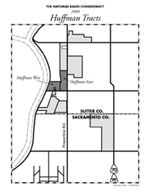 The Conservancy recently completed acquisition of two parcels that have been integrated into its habitat lands inventory. The 181-acre Huffman West tract and the 136-acre Huffman East tract are contiguous, and also connect with other Conservancy preserves. This connectivity further advances the Conservancy’s efforts to assemble the HCP-required 2,500-acre contiguous reserve.

The Huffman West tract is dedicated to the production of upland crops to support Swainson’s hawk populations. A significant portion of Huffman West has historically been in alfalfa production.

The Huffman East tract has historically been dedicated to rice prodcution, and some rice production will likely continue in order to keep adjacent agricultural drains charged with water needed to support adjacent giant garter snake populations.

Combined, the two tracts bring the Conservancy’s total acreage count to just over 3,400.