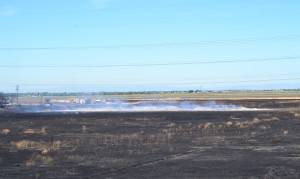 Sacramento Mayor Pro Tem Angelique Ashby, who represents the North Natomas area, was recently interviewed by the press and media while on the scene of a large grass fire in North Natomas. She drew attention to a nearby Natomas Basin Conservancy preserve, saying it acted as a sort of “green belt” and possible firebreak.

The fire, which took place on June 27, traveled up East Levee Road and North of West Elkhorn Boulevard. It was eventually extinguished by fire department helicopters and ground crews.

The Conservancy’s preserves along the northernmost Sacramento County boundary do in fact serve as a green belt in the general area where the June 27 fire took place. It’s good that in addition to the preserves’ many other benefits, their potential role in limiting the spread of large-scale grass fires are recognized as well.