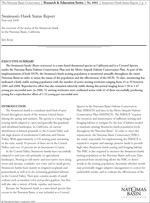 The Conservancy has begun posting research and education papers on its web site for public consumption. The purpose of the effort is to promote better understanding of the biological and scientific issues associated with the implementation of the Natomas Basin Habitat Conservation Plan (NBHCP) and the Metro Air Park Habitat Conservation Plan (MAPHCP). The Series seeks to serve as a resource for students, educators, the media and those interested in wildlife and the creation of habitat in the Natomas Basin of California. Series reports will be published on a periodic basis.

The first two installments are overviews prepared by Conservancy consulting wildlife biologists Jim Estep and Eric Hansen. Estep has been conducting Swainson’s hawk monitoring for the Conservancy since its inception, and Hansen has done the same for the Conservancy with giant garter snake monitoring. The papers can be found in the Research & Education Series section of our web site under “Education”.