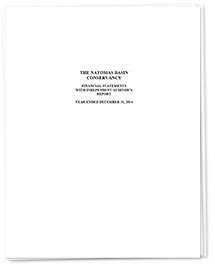 With another “clean opinion” from its auditors, the Conservancy’s Board of Directors moved to accept the audited financial statements for the 12-month period ended December 31, 2014. The Conservancy’s auditor for the 2014 audit report was Gilbert Associates, Inc. of Sacramento.

Gilbert met with the Conservancy’s Audit Committee, including independently. The Audit Committee recommended to the Board of Directors that the auditor’s report be accepted. The Board action took place at the Board of Director’s April 1, 2015 meeting. Under California’s Non-Profit Integrity Act of 2004, an audit of annual financial statements is required. An annual audit is also required by the 2003 Natomas Basin Habitat Conservation Plan. Audits of Conservancy financial statements are posted on the Conservancy’s web site dating back to 1999 (see “Helpful Documents > Annual Reports & Audited Financial Statements“).