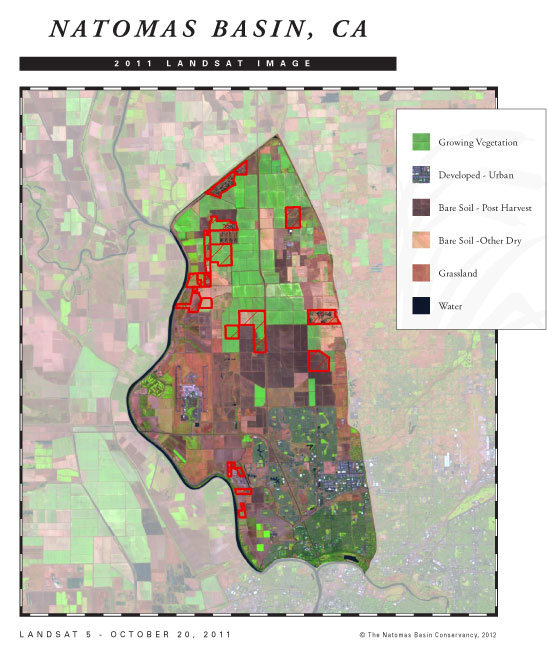 The Conservancy is required to document a number of conditions in the 54,000-acre Natomas Basin, and each year since its inception, it has acquired a LANDSAT image so that documentation is Basin-wide and trackable from year-to-year. LANDSAT is a long-standing program that secures satellite imagery of the Earth’s surface. Images are available for purchase by the public. The Conservancy works on the project each year with technical experts from Ducks Unlimited.

The images are acquired during the late fall or early winter of each year. The most recent year’s image was taken October 20, 2011 and was secured after reviewing images ranging from September through December 2011. The goal was to secure a one version that best captures conditions in the Basin and is free of clouds and fog. In the current LANDSAT image, it is especially easy to identify the southern portion’s urbanized area and the northerly portion’s rice fields. The Sacramento International Airport is clearly visible in the westerly portion of the Basin.

The image is an integral part of the Conservancy’s NBHCP Implementation Annual Report each year.