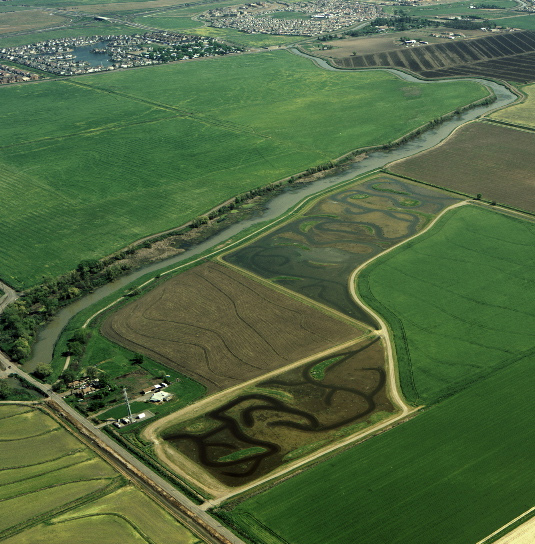 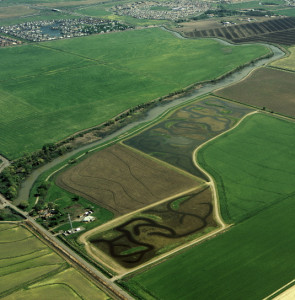 Aerial view of the Conservancy’s Natomas Farms 2003 managed marsh project. Note Fisherman’s Lake to the left and behind the marsh area, with suburban Sacramento in the far background.

The largest project of the 2003 construction season took place on the Conservancy’s Lucich North and Frazer tracts. The two tracts are adjacent, and border on the Natomas Cross Canal at the northern end of the Natomas Basin.

Combined, the two tracts total approximately 360 acres, and the newly created managed marsh portion covers the entire area when land classified as “associated uplands” is included with that portion of the preserves receiving water.

The projects were particularly challenging for several reasons. First, the flight path for Sacramento International Airport was nearby. Conservancy staff and consultants worked closely with Airport officials to create a final preserve that adhered to the Natomas Basin Habitat Conservation Plan (NBHCP), but that also met Airport officials’ requests for minimizing large concentrations of waterfowl which might present a bird-aircraft hazard.

Second, much of the managed marsh was constructed in an area that over a century ago was classified as Fiddyment Lake. After reclamation, the land was farmed for many years, but former farmers indicated that the water table was very high and crops were often lost as a result. In order for the Conservancy to work in the area, special care had to be taken to satisfy the NBHCP’s habitat requirements, but also not risk injury or loss to construction crews.

The reward for the construction efforts has been that giant garter snakes have already been identified on the Lucich North as well as the much smaller Lucich South tracts. Heretofore, it was anticipated that it might take as many as three years to find giant garter snakes utilizing the newly created marsh complexes. However, early-2004 captures of the animal by Conservancy biological monitoring crews helps provide hope that the preserves will provide the sanctuary and environment that will make great strides towards achieving the mitigation effort.

For 2004, the Conservancy has one additional restoration and enhancement construction project. In this case the Conservancy’s efforts will be focused on the southern end of the Natomas Basin adjacent to Fisherman’s Lake. The Cummings tract will provide both managed marsh and upland so that the tract provides direct benefit for giant garter snake and Swainson’s hawk.