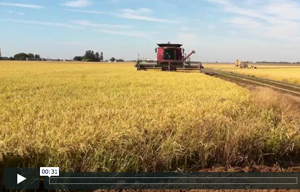 The NBHCP requires that 50 percent of all Conservancy-owned land be committed to rice production. The giant garter snake and certain other of the HCP’s “Covered Species” rely heavily on rice production for their survival. No where could that be more true than in the Natomas Basin of California. With so many acres taken out of production due to urbanization, airport activities and with the expectation of future development, those acres that remain are more critical than ever to the survival of the giant garter snake, one of the few aquatic snakes in California.

After last year’s devastating rice production conditions, there were concerns about what this year’s production and harvest might bring. Last year, some Conservancy fields were totally blanked (zero grain production) and many others didn’t even break 50 percent in overall yield. The primary culprit seemed to be the late, cool weather that the Basin experienced in the spring and early summer of 2010.

This year, there was slightly warmer weather in the late spring and early summer, and most importantly, Conservancy tenant farmers adapted. From ground preparation to seed variety selection, various rice “cultural” practices were altered and amended so that a good crop got established. This resulted in what looks to be an excellent harvest, perhaps one of the best in recent memory.