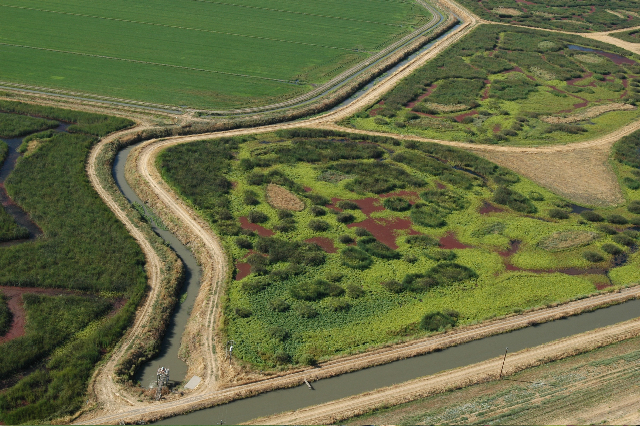 The Natomas Basin HCP requires that the Conservancy’s marsh complexes remain fully functional. The watered channels of the marsh complexes are the biggest challenge in achieving this functionality requirement. During the summers of 2007 and 2008, the first round of marsh channel maintenance activity was successfully completed. This was a major undertaking for the Conservancy.

These channels are used to convey water to and from marsh complexes, and generally serve as habitat for several of the HCP’s covered species, especially giant garter snakes. One of the toughest challenges to fully functioning marsh complexes is aquatic vegetation overgrowth. Accumulating vegetation in and on the channels slows water flow, thus causing particulate matter to settle on channel bottoms. Over time, the channel can accumulate so much of this material that flow is impeded. Then, vegetation gets a footing in the channel bottoms, and can get heavy and thick, and aquatic life cannot penetrate it. A process called eutrophication also plays a role in this process. (Eutrophication is the process by which a body of water becomes rich in dissolved nutrients, thereby encouraging the growth and decomposition of oxygen-depleting plant life and resulting in harm to other organisms.) 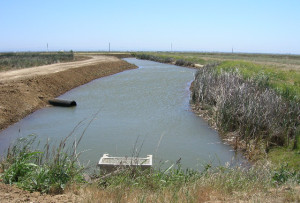 To resolve these and other issues, the Natomas Basin HCP calls for clearing action which maintains these water bodies so that they are fully functional. With the exception of the BKS tract marsh complex, which is structurally different than the Conservancy’s other marsh complexes, all marshes were cleaned out and restored to their full functionality. The last one was completed late this summer.

Always a concern is whether wildlife will re-colonize the complexes after maintenance work has been completed. In most cases, giant garter snakes, one of the key “covered species” in the Natomas Basin HCP, re-colonized the subject marsh complexes quickly.

The channel maintenance projects were thought to be needed about once every five to 10 years. Now that the Conservancy has completed its first cycle of this work, much has been learned, and we’ll be watching to see how the channels perform and the covered species respond in order to learn even more.